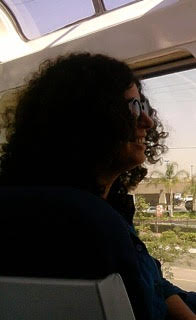 Mai Abu Eldahab is a curator from Cairo living in Brussels. She was from 2007 to 2012, the director of Objectif Exhibitions in Antwerp, where she curated a programme of solo shows including exhibitions by Guy Ben-Ner (IS), Mariana Castillo-Deball (MX), Michael Stevenson (NZ),Hassan Khan (EG), Michael Portnoy (US), Norma Jeane and Tim Etchells (UK), and Patricia Esquivias (ES), Barbara Visser (NL), amongst many others. She has edited and co-edited several publications including After Berkeley (2012), From Berkeley to Berkeley (2011), Circular Facts (2011) and Hassan Khan The Agreement (2011), and the record Behave Like an Audience by Concert, all published by Sternberg Press. In 2014, she co-curated the Liverpool Biennial with Anthony Huberman.